How is the LED bulb performing in our homes?

When LED bulbs first came out, consumers were skeptical. The cost was high and the quality of light was not what was typical with incandescent bulbs. New advances in LED technology have steadily improved these bulbs so that they’re energy efficient, they emit light in varying color ranges, and they’ve become much more affordable.

Up until 2010, the U.S. household electricity consumption had been increasing steadily each year for 60 years. In 2012, there was a significant dip in usage. The new variable came in the form of energy-efficient lighting. Where less than half a million LED bulbs had been installed in 2009, that number has now climbed to over 450 million. Nearly 70% of all Americans have purchased at least one LED bulb. The U.S. Energy Information Administration predicts that over the next 20 years, LED lighting has the potential to reduce annual retail electric sales by 300 to 435 billion kWh. (Source)

The popularity of the LED bulb has increased as their cost has decreased. Since 2008, consumers have seen a 94% reduction in their price. As they use 85% less electricity than incandescent bulbs, are more durable, work both indoors and out, and can be utilized in smart lighting solutions, it’s no wonder people are making the switch. According to the Energy Institute at Haas, if one billion energy-efficient bulbs were installed, and if operated three hours per day, it would compute to a savings of 50 million megawatt hours per year. (Source) Former president of the Energy Bar Association, Steve Huntoon, lays it out clearly with cost calculations. “A General Electric soft white 60W Edison bulb can be had in quantity purchase for $1.30, and rated to last for 1.4 years based on an average use of three hours per day. A GE soft white 60W equivalent LED bulb can be had in quantity purchase for $3, use 10W and last for 13 years based on the same average. So over 13 years, Edison lighting would cost an extra $9 for the bulbs and an extra $78 for the electricity (at 11 cents/kWh).” (Source) That’s quite a significant cost difference. Huntoon also wrote, “For all the attention given rooftop solar as environmental boon, new age investment and regulatory flashpoint, the LED bulb is three times more significant.”

LEDs are appealing because of their base cost, long life, and energy cost. They are the most durable and efficient lighting choice currently available. When comparing options on the market, why wouldn’t homeowners use the bulb that not only pays for itself in energy savings, but also lasts 50 times longer?

Learn more about Contemporary Energy Solutions by visiting us online. 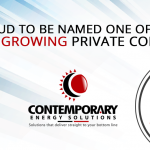